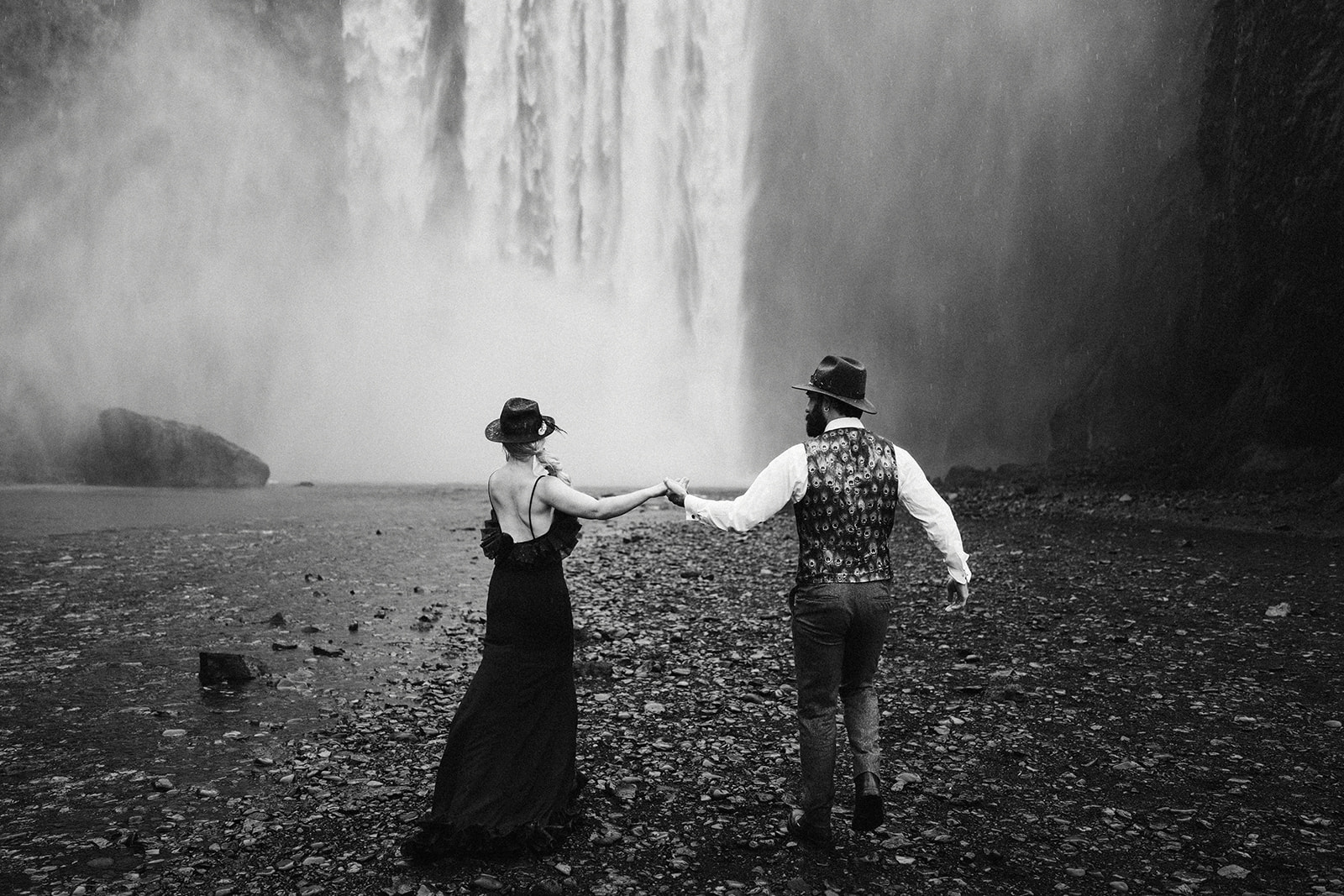 By Emma ParkerJune 9, 2022No Comments

6 locations for an Iceland destination wedding or engagement shoot.

I Love Iceland, i’ve been 7 times and every single time its a completely different trip. An Iceland Destination Wedding really would be a one of a kind wedding, no matter what time of year you choose. Once you’ve decided its the location for your proposal, engagement, wedding or elopement, one of the important things to be prepared for when visiting the land of fire + ice, apart from the extremely unpredictable weather, is how far apart things are. Its pretty easy to assume everything is close by Reykjavik, but if you want to get away from the hoards of tourists on the golden circle (which is really is still an epic trip) then you need to plan your route before you go, you’re also going to need to get along with your photographer because they’ll be spending a-lot of time with you in the car.

It’s not a trip you will ever regret, the scenery in Iceland is overwhelmingly beautiful, like nothing you would ever see in the vast majority of countries, enormous waterfalls, some of which you can get under and behind, wild horses roaming the lands and not another soul for miles – creating an ambience for phenomenal stark images with a wild backdrop. It’s no wonder they filmed Interstellar, Game of Thrones and The Secret Life of Walter Mitty there – if you haven’t seen any of these i suggest you do – the scenery really will blow your mind.

There are so many locations i would recommend for your photoshoot in Iceland however if i had to narrow it down to a few of my favourites i would say these are the ones!

Skogafoss is found in South Iceland, around 2 hours from Reykjavik, the water in this waterfall comes from 2 huge glaciers Eyjafjallajokull and Myrdalsjokull. You can climb to the top of this epic waterfall, all 370 steps, for a jaw-dropping view over the coastline where will also be doused in spray from the huge plume of water coming down the cliff face. This waterfall is part of the Golden Circle tour however it really is one you shouldn’t miss. Here are some of my favourites: 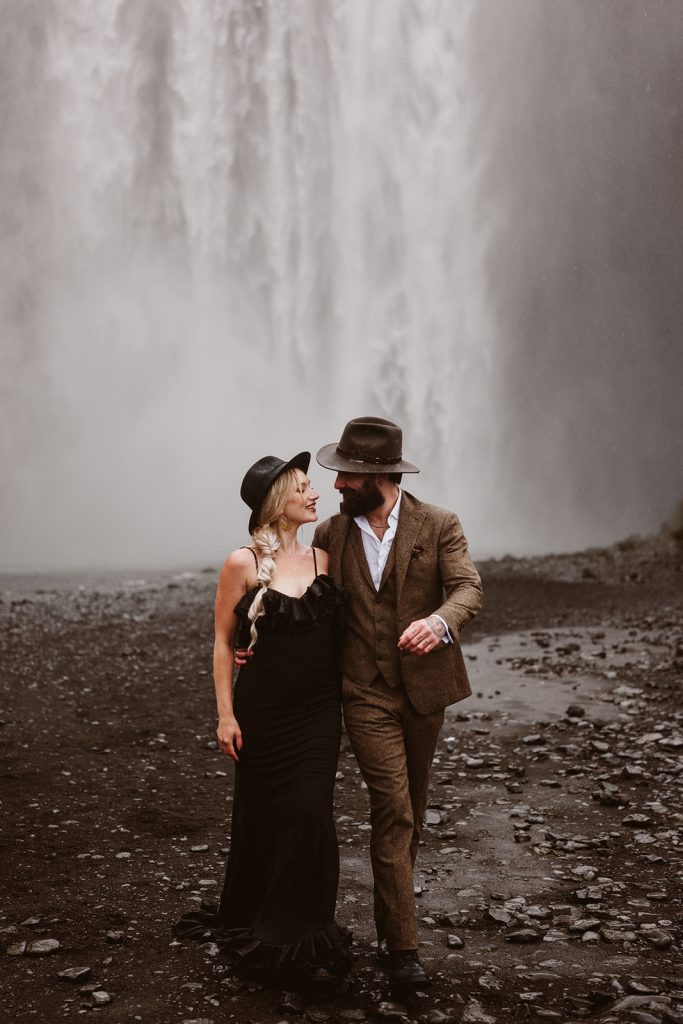 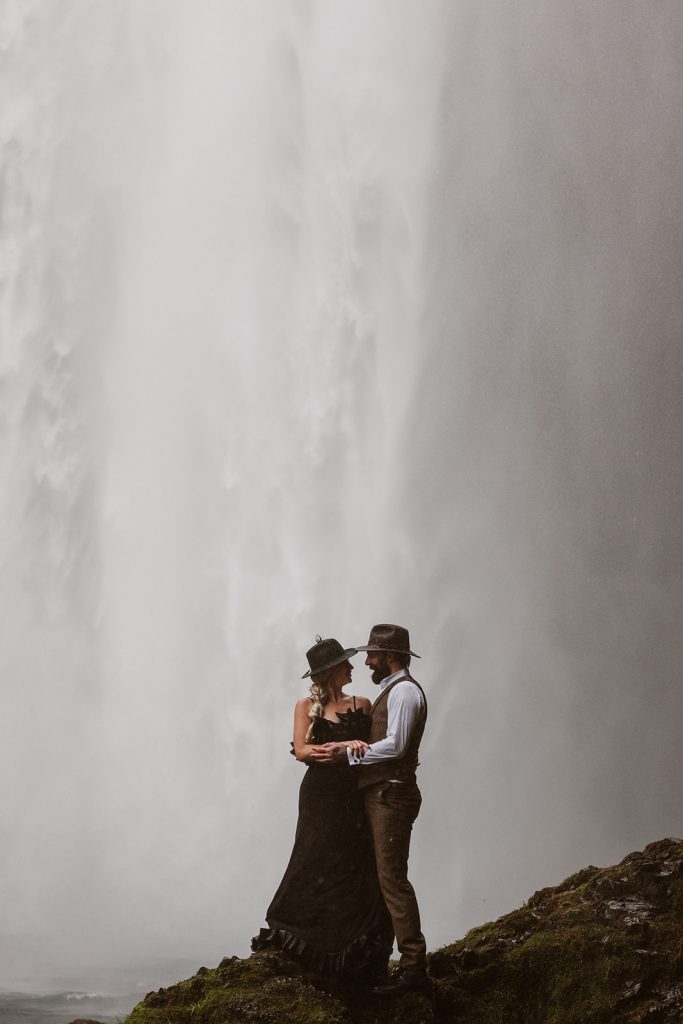 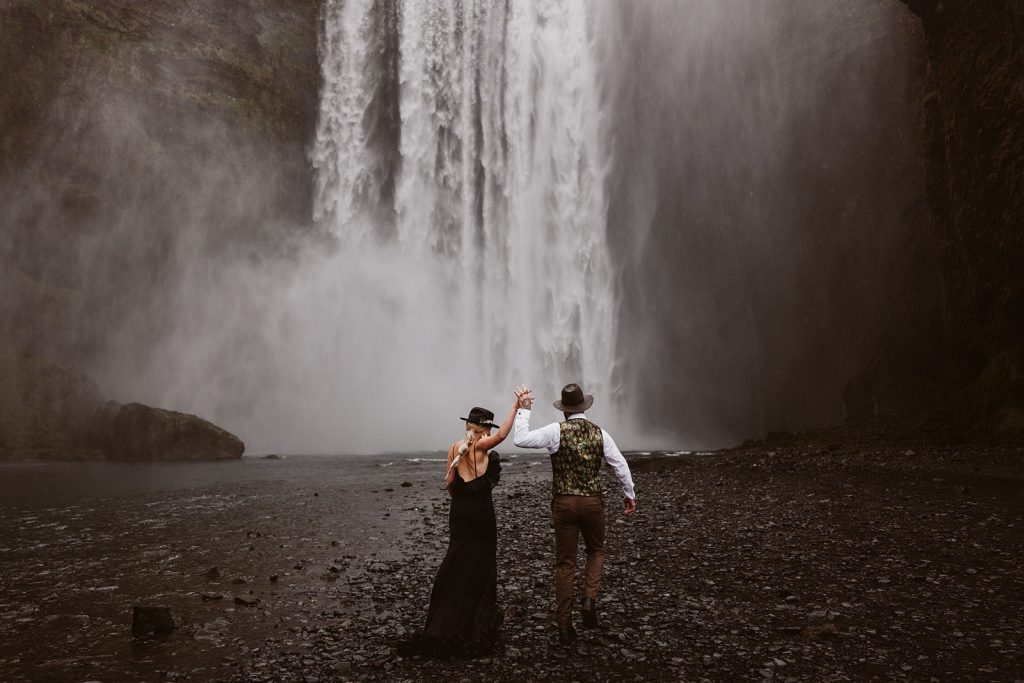 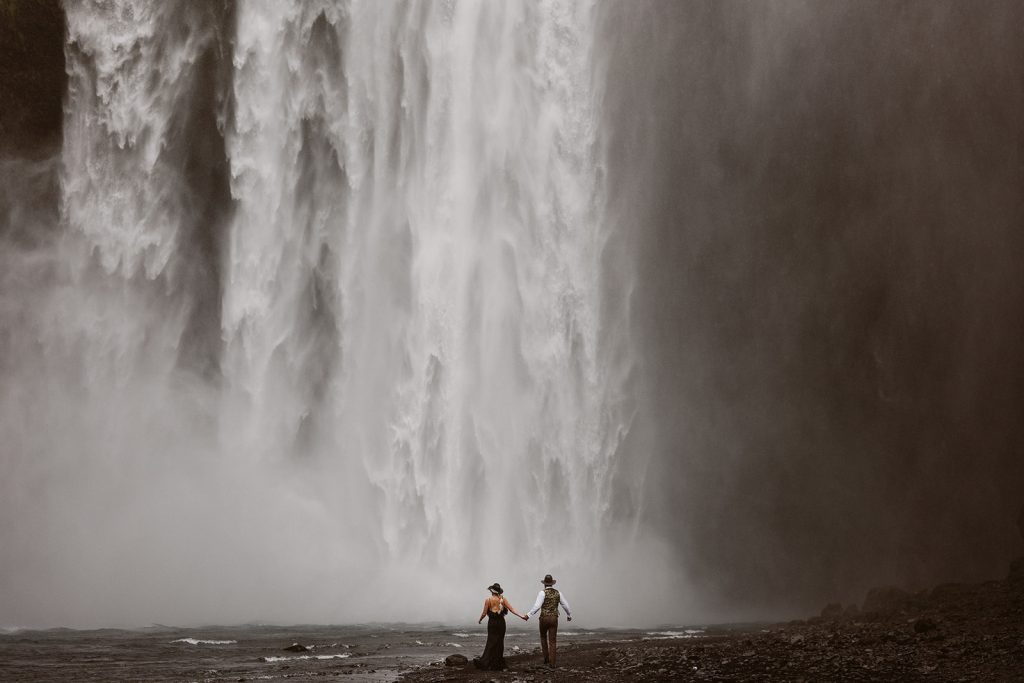 This is the magical waterfall which you can get behind, for that reason its pretty popular but makes for some equally epic photos as you can see…. 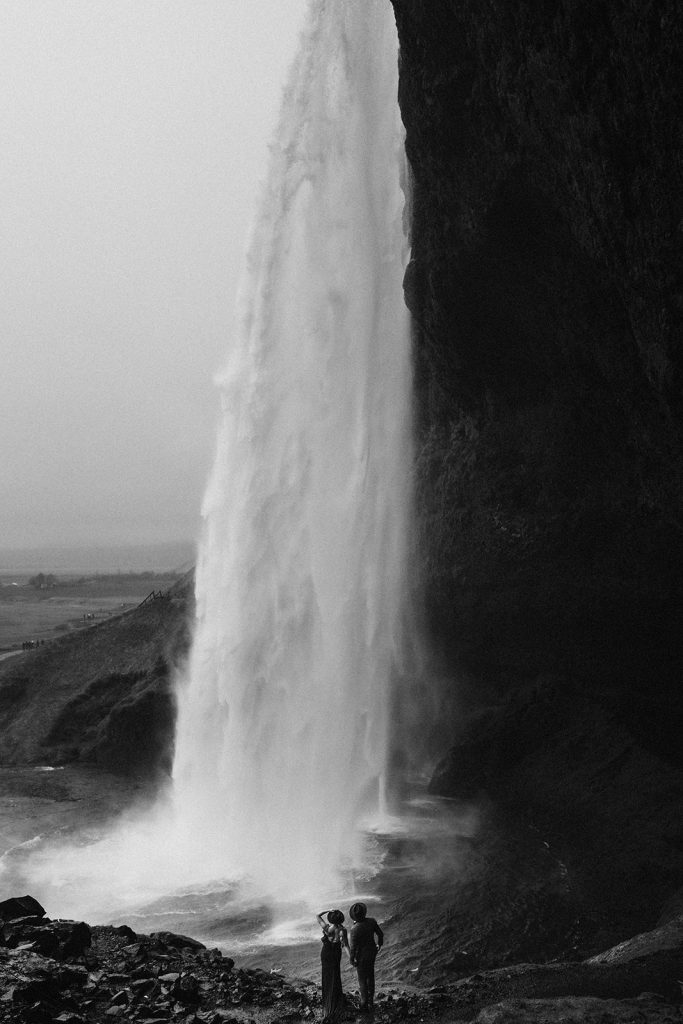 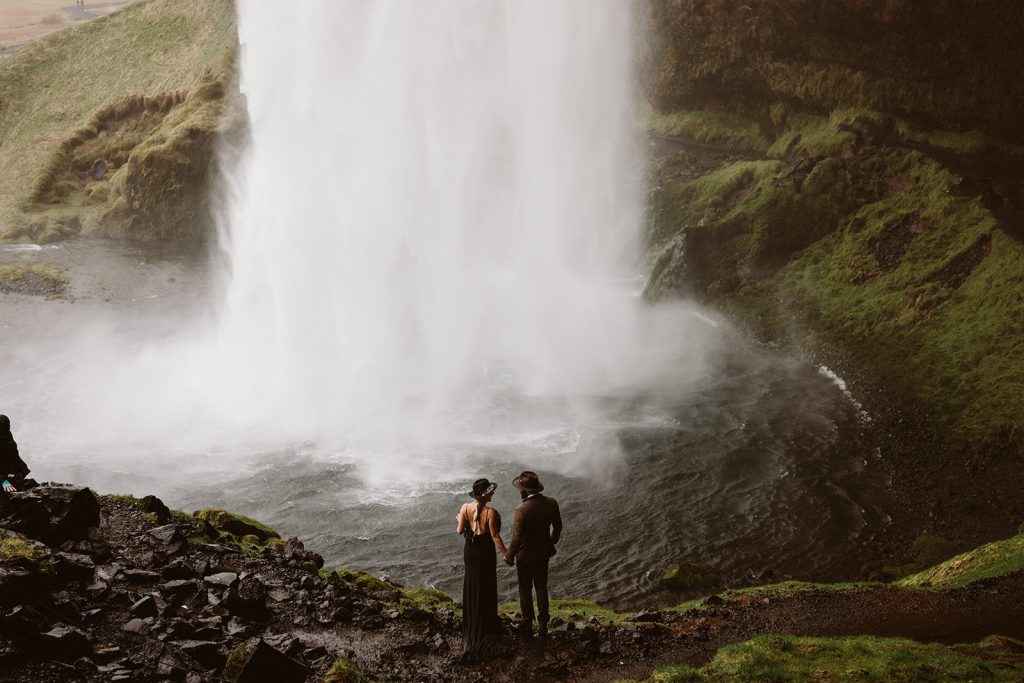 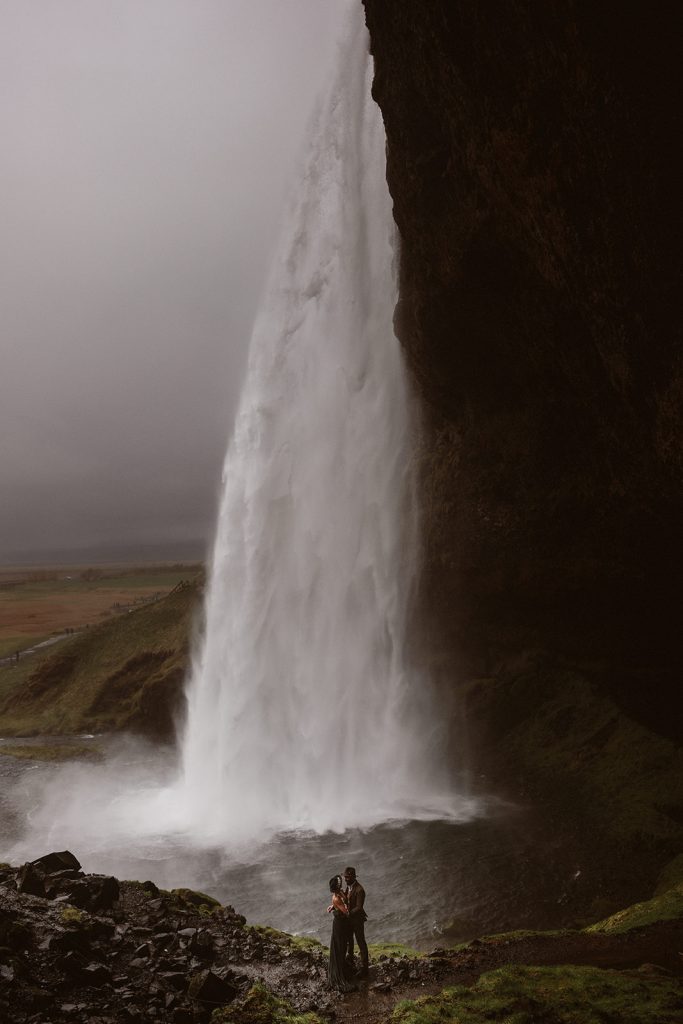 Yes the canary islands have beaches with black sand, but they’re nothing like this. Black Sands beach, or its real name Reynisfjara beach in Iceland is erie and stark, with crashing waves and what looks like an endless hike on the moon. Reynisfjara beach was used on Game of Thrones, Noah and Star Trek, so you can imagine what the terrain and surrounding area looks like, a vibrant outfit on this landscape really makes for the most phenomenal photoshoot. Another favourite area of the black sand beach for me is the basalt columns, tricky to climb up but again they make for unbelievable images. 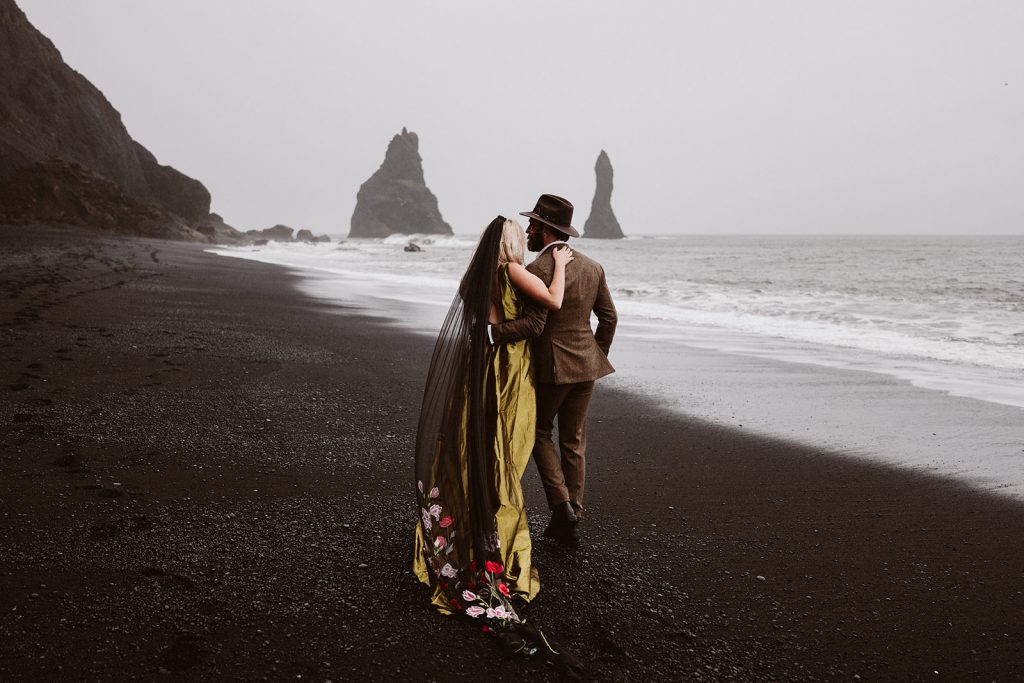 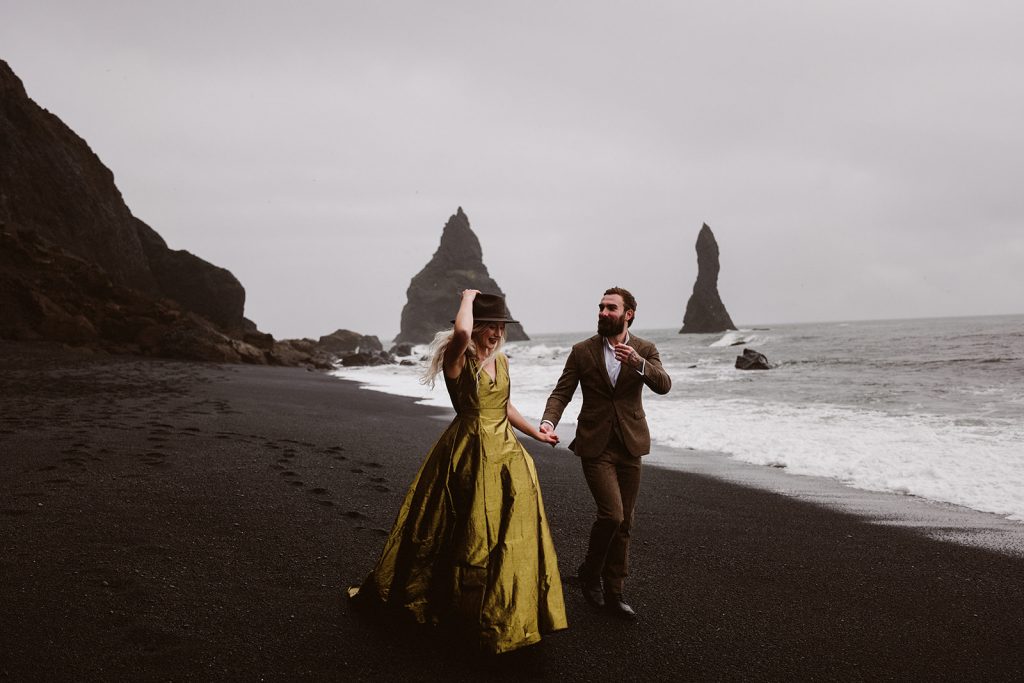 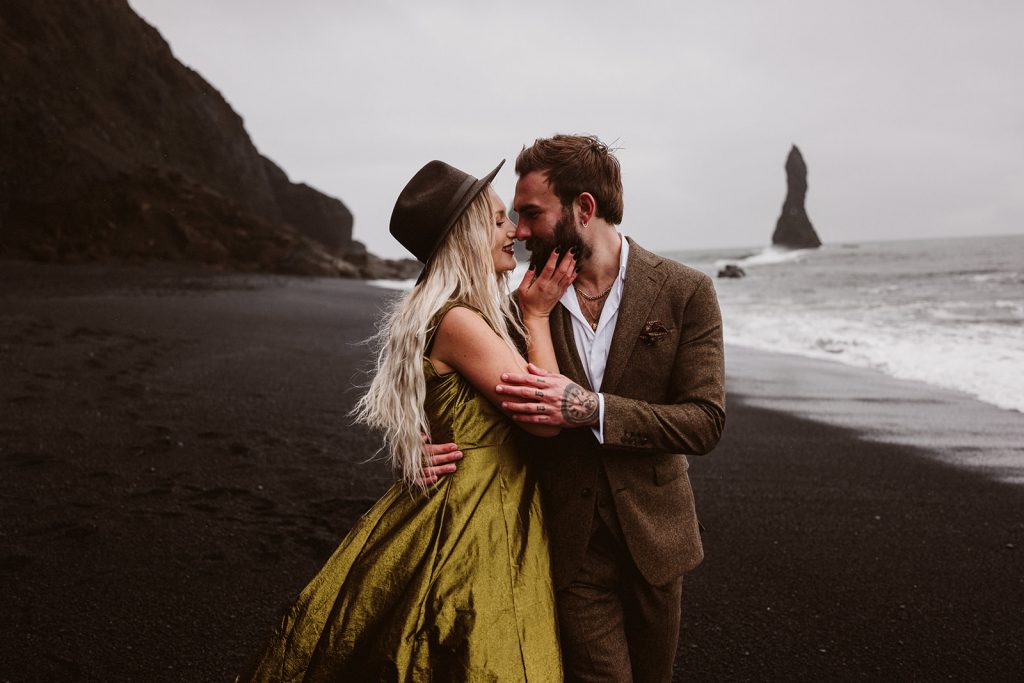 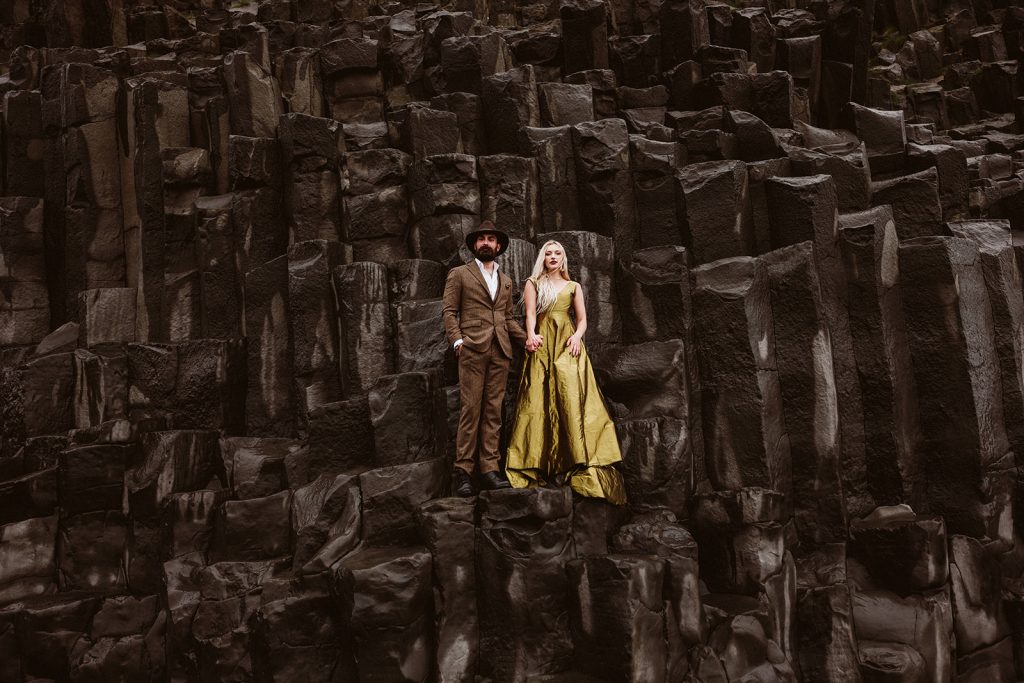 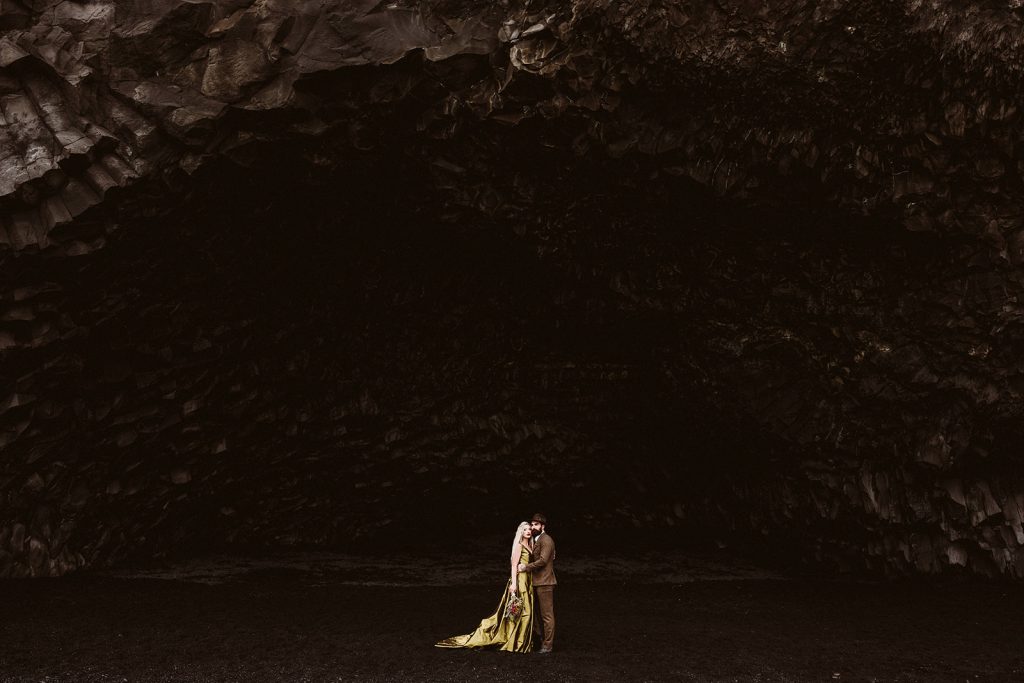 The first time i visited this plane crash i was floored by the journey there, it was like hiking on the moon. The plane crash was the result of a US Navy plane running out of fuel, everyone survived, leaving an enormous shining plane hull sat on the jet black sands of Reynisfjara beach. You can climb on the plane, explore the inside and capture some special images. A word of warning though for this location, you can’t drive to it so its a bit of a hike to get there. Makes a great spot for a shoot though – its worth the walk!

Hjálparfoss is a stunning, yet enormous, double waterfall in the south of Iceland, east of Reykjavik 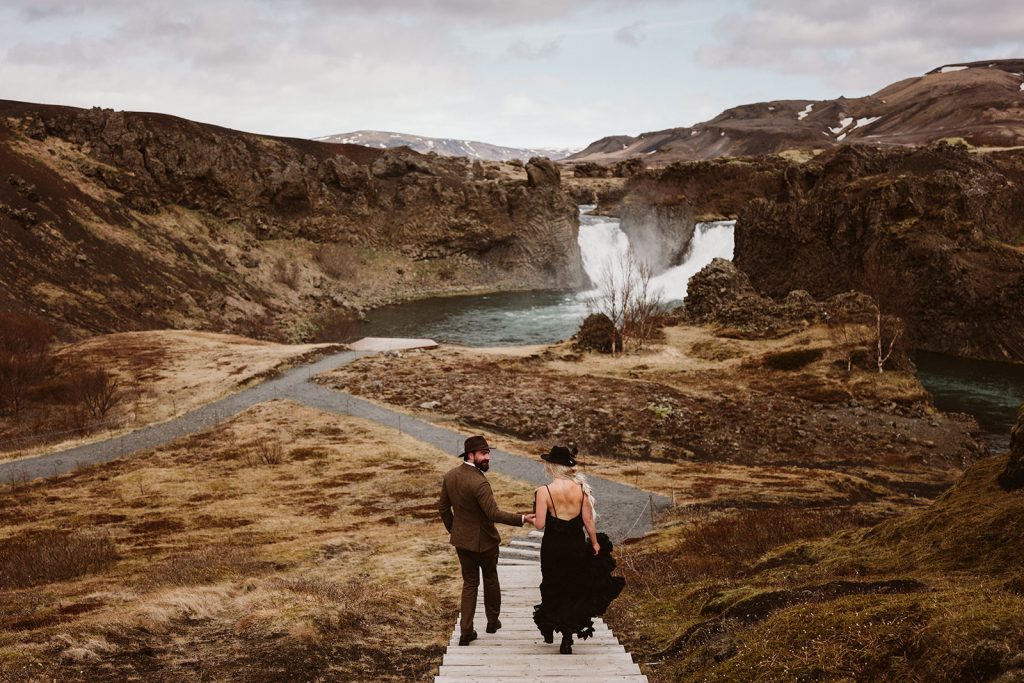 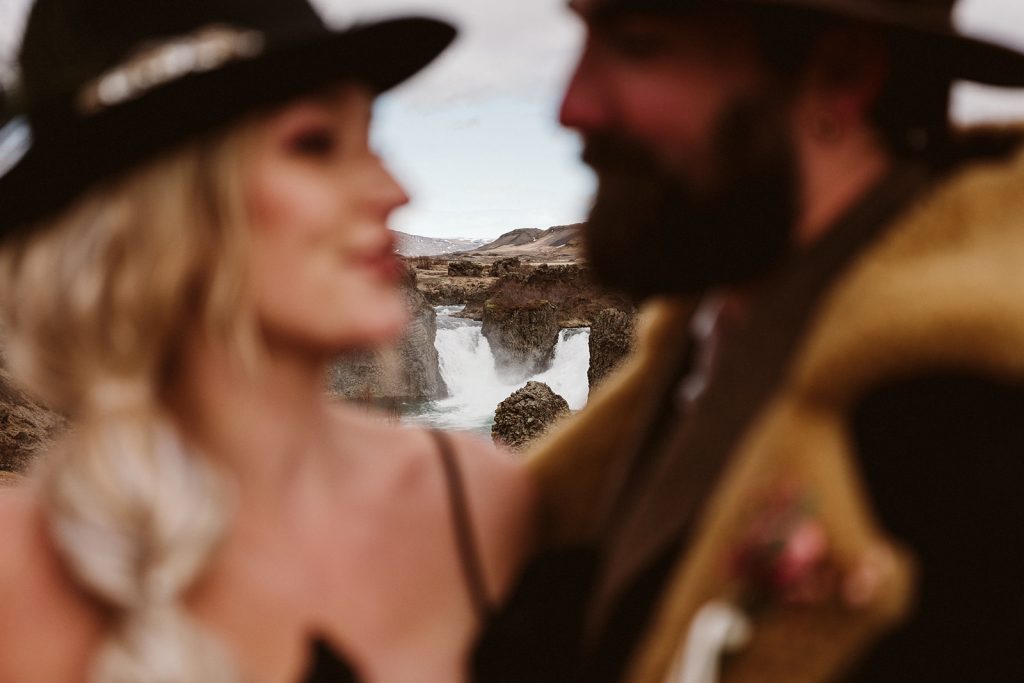 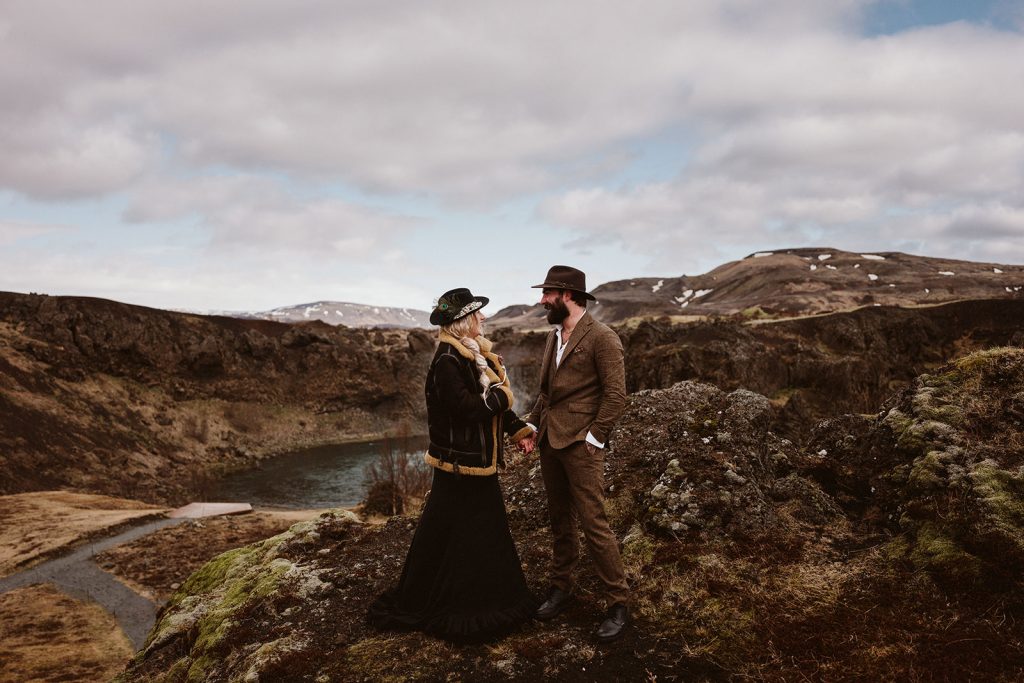 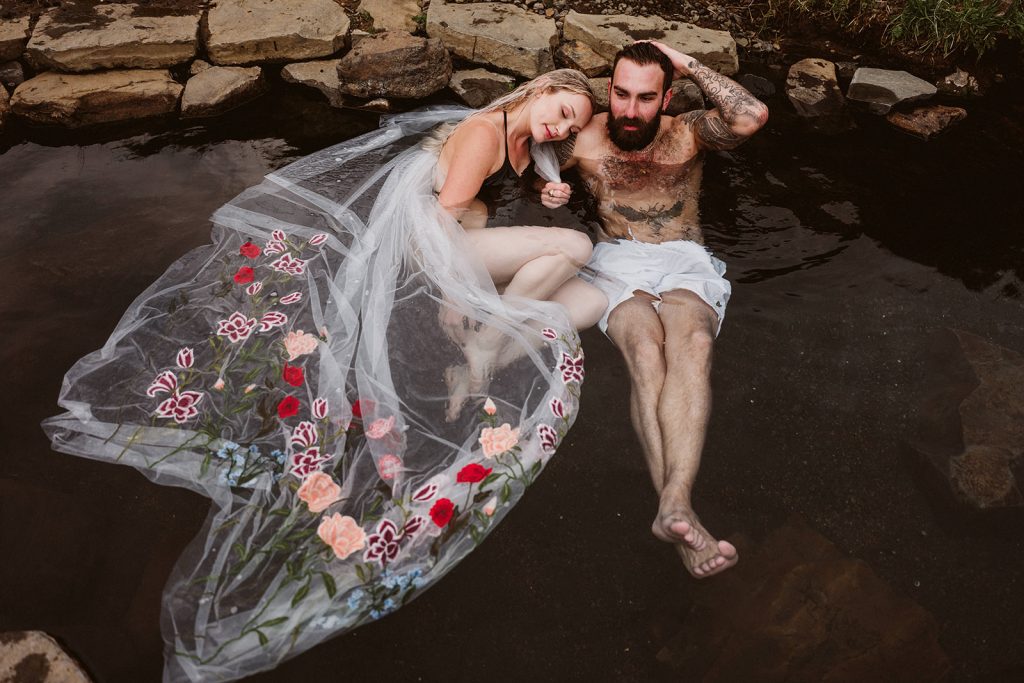 Looking for a wedding photographer to shoot your engagement, wedding, elopement or just an adventure session in Iceland Get in touch, if you’re not ready for a chat, check out some more epic Iceland shoots here.

The epic suppliers for the above images are: